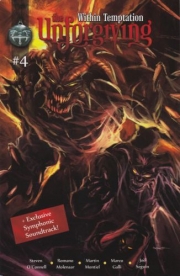 Synopsis : The hunters become the hunted as an evil force is hot on the trail of the Wraith Taskforce. Janyce gets more case information from her anonymous "friend" which will hopefully lead her closer to closing the case file on The Disciple. At the same time, another body is found. Is it the work of The Disciple or has the "Shoe" killer decided he wants to grab the headlines?