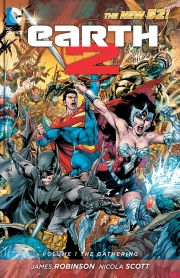 Synopsis : Apokolips has invaded, and Earth has never been closer to total destruction. In its final, desperate hour, the planet's greatest heroes rally to defeat the Parademon army, knowing full well what the ultimate cost could be.

This is not the world you're used to. This is Eath 2.

Now, years have passed and Earth has rebuilt, but a new, enven greater threat looms. Facing utter annihilation, the human race must turn to the most unlikely heroes.