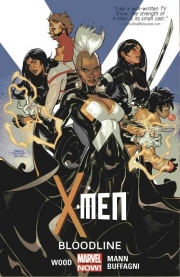 Jubilee is haunted by her adopted baby Shogo's past...or is it his future?! When the Jean Grey School comes under attack, leaving a young X-Man dead on the school's front lawn, Jubilee's worst nightmare has come to pass...and the future is being rewritten. The JGS has always been a school, but is it time to become an army? Or will their differences prove their greatest asset? As a multi -generational war unfolds, with mothers against daughters, fathers against sons, Jubilee is caught in the middle. The future has come calling, and he wants his son Shogo back! But will Jubilee and the X-Men let their bouncing baby boy go without a fight? Hell no!
source : editor