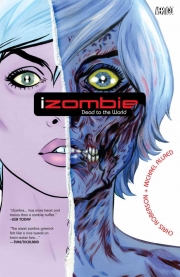 Gwendolyn “Gwen” Dylan is a 20-something gravedigger in an eco-friendly cemetery. Once a month she must eat a human brain to keep from losing her memories, but in the process she becomes consumed with the thoughts and personality of the dead person – until she eats her next brain. She sets out to fulfi ll the dead person’s last request, solve a crime or right a wrong.

Our zombie girl detective is joined by a radical supporting cast: her best friend Eleanor, who happens to be a swinging ’60s ghost, a posse of paintball blasting vampires, a smitten were-dog and a hot but demented mummy.