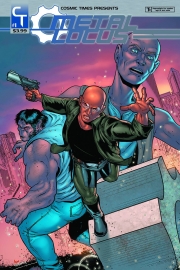 Set a century into the future, Metal Locus follows Hermes a data courier who suddenly finds himself in possession of a program that can save the world or destroy it. Pursued by those that want it and protected by his friends, Hermes must decide if saving the world is more important than getting paid. Written by Stephan Nilson (Batman Strikes and The Pound) and illustrated by Larry Watts (Army of Darkness and Robyn Hood), Metal Locus is a science fiction/action/adventure story with surprises around every corner.