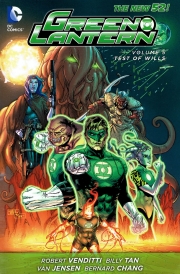 Synopsis : Collects
Green Lantern (2011) #27-34
Green Lantern Corps (2011) #31-33
Hal Jordan, the greatest Green Lantern in the history of the Corps, has lost everything. Friends have died, Oa has been destroyed, and now he must say goodbye to Earth! As war threatens to dismantle the Green Lantern Corps, Hal does the unthinkable: He asks for help. Can he and a team of handpicked Lanterns remove a deadly weapon from the enemy's arsenal, or will they be dealt their first defeat?
source : editor