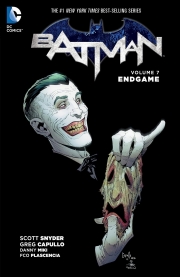 Synopsis : Collects
Batman (2011) #35-40
Batman’s greatest foe has returned for one last gag-but this time, not even the Joker is laughing. In their last encounter, the Dark Knight failed to live up to the Joker’s grand plans, so now the Joker is deadly serious.

The games are over and, for their final showdown, the Clown Prince of Crime won’t be staging a comedy. No more macabre mind games. No more perverse pranks. The crazed killer who has elevated evil to an art is about to paint his masterpiece: the utter destruction of Batman and everything he holds dear. He’ll turn the Justice League against Batman. He’ll turn the people of Gotham into giggling psychopaths. But that’s just the setup-the punchline is even more terrifying.