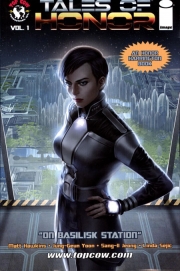 Synopsis : Collects
Tales of Honor (2014) #1-5
Based on the NY Times best-selling military science fiction novels by David Weber, this original comic book series introduces space ship captain Honor Harrington on the eve of her execution. From prison, Honor relays her epic adventures, starting with a command outpost to a hellish backwater star system that turns out to be the source of an uprising that will bring war to her home planet. This series is part of a new multi-platform story world that includes The Secret Fleet, a ship-to-ship combat mobile game app available for free download on both iOS and Android and a feature film in development.