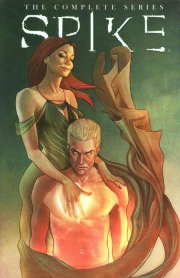 Synopsis : Collects
Spike (2010) #1-8
Spike is out on his own, away from Angel's watchful eye, and in charge of his own destiny. Old flames and new challenges arise as Spike faces a crazed killer, Wolfram & Hart, and the consequences of having a soul. Collects the complete 8-issue series of Spike by Brian Lynch that connects the After The Fall storyline to the subsequent Buffy: Season 8 series.
source : editor