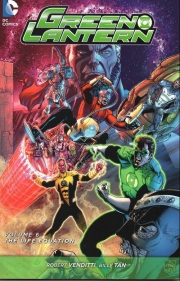 Synopsis :  Collects
Green Lantern (2011) #35-40
+Green Lantern Annual (2011) #3
On a higher plane of existence, the incredible beings known as the New Gods have waged an eternal war against the cosmic tyrant called Darkseid. Now their quest to break the deadlock and defeat their nemesis has led them to the power rings of the Lanterns. They mean to seize the rings, reforge the emotional spectrum, and unlock the Life Equation—a weapon capable of reshaping reality itself.
source : editor