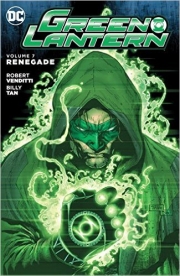 and the Sneak Peek story from Convergence: The Atom #2

Once leader of the Green Lantern Corps and member of the Justice League, Hal Jordan is now a fugitive hoping from planet to planet trying to stay one step ahead of whatever bounty hunter is on his trail. But Hal didn’t leave the Corps empty handed. He took with him the energy gauntlet, the prototype to the Green Lanterns’ rings, and he’s not afraid to use one of the most powerful weapons in the universe.
Once a cop, always a cop.
And if Hal’s life wasn’t in turmoil enough, the Green Lantern Corps has gone missing and he takes it upon himself to become a one man Corps.