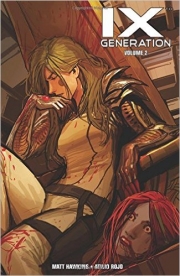 Synopsis : Collects
IXth Generation (2015) #5-8
In 2102, the world ended – but don't worry: someone was planning on it. For centuries, a m
aniacal genius named Francesca Taylor set about implementing a masterful plan known as the "Aphrodite Protocol," an elaborate series of events designed to initiate the apocalypse on human terms. After a series of extension level events in the 22nd century, the Protocol began its work, breeding human survivors into cyborgs strong enough to withstand the harsh years ahead, herding them towards a society of Taylor's own design – complete with its own pantheon. Now, 700 years later, these cybernetic deities – the IXth Generation – have awakened to find themselves in charge of a world kneeling at their feet…with mixed results. Following the events of IXTH GENERATION VOL 1, the bickering and battles between these young technological gods has only gotten worse, as the IXs find themselves threatened by an ancient evil known as the Darkness. But instead of unifying against this common enemy, the IXs have fallen into bitter infighting and territorial battles, risking the fate of the world they were meant to rule. Will the discovery of other ancient Artifacts – including Aphrodite IX's wielding of the Witchblade – bring hope to this barren future? And will the Protocol be fulfilled…or subverted?
source : editor