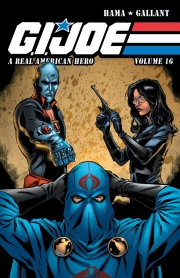 Synopsis : Collects
G.I. Joe : A real american hero (1982) #226-230
Cobra Commander believes he has disposed of all the Cobra members that were planning to strike against him. But with Destro saving all his men from the Silent Castle and Zartan leading his group away before any harm could come to them, the Commander's Cobra Nation might be in more trouble than he thinks.
source : editor