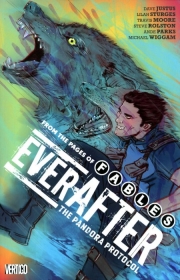 Synopsis : Collects
Everafter (2016)(V.O. anglais) #1-6
Spinning off from the Eisner Award-winning FABLES, the magical and the mundane now coexist in an uneasy and fractured peace. Some of the remaining Fables seek to use their freshly revealed powers for the greater good. Others, however, have darker desires and instead plot to unleash supernatural terror on an unprecedented scale.
It’s a brave new world—and the Shadow Players are the bravest of them all. This elite network of agents—Fable and Mundy alike—travel the globe to battle the magical threats that have arisen across the newly enchanted Earth. They include such legendary Fables as Peter Piper and Bo Peep, and Connor Wolf, the rookie on the team.
Ruthless mercenaries. Ancient artifacts. Undead hordes. The Shadow Players must take them all on—and guard against corruption from within—if the world is to have its happy ending.