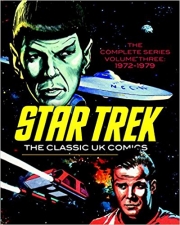 Synopsis : Filling a significant gap in Star Trek lore, this series presents never-before-reprinted comics that originally appeared in weekly British magazines beginning in 1969. These are the U.K. voyages of the starship Enterprise—and, now, at last, fans everywhere can experience them.

This third volume reprints all comics from 1972 to 1979 and concludes the series that presents the complete Star Trek UK comics. Bonus material includes various one-shots and annuals, as well as strips created for various merchandise and toys. Star Trek expert Rich Handley provides the second half of a detailed encyclopedia of all things Star Trek from these British comics. Exploring the minutiae is half the fun of enjoying a franchise, and when it comes to Trek, there's no end of trivia to devour.