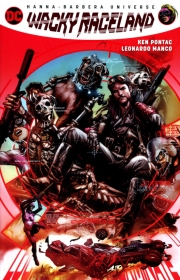 Synopsis : Collects
Wacky Raceland (2016) #1-6
In a postapocalyptic world on the brink of collapse, a group of racers has been selected by a mysterious voice known only as the Announcer. Their cars retrofitted with weaponry and advanced AI, they’ve been given one simple directive—the race is on, and the winner gains admittance to Utopia, a fabled land where the world still thrives. For the losers, only death awaits.
The terrain is treacherous. Cheating is encouraged. And each racer has his or her own secret agenda. But are they racing toward Utopia…or toward the terrible truth about what happened to them and their world?