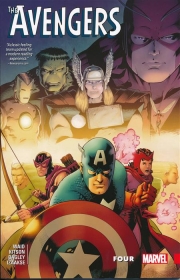 Synopsis : Collects
Avengers (2016) #1.1-5.1
The Old Order Changeth - more than you ever suspected! For the first time ever, learn what really happened all those years ago when the founding Avengers turned their membership over to a set of new recruits. The recently thawed Captain America is joined by three reformed super villains - Hawkeye, Quicksilver and the Scarlet Witch - as a new group of Earth's Mightiest Heroes takes shape! But when a stranger comes to New York, they may have to draft a new member to help them defeat him! It's a new story of Cap's Kooky Quartet that has direct ramifications for the Avengers of today!