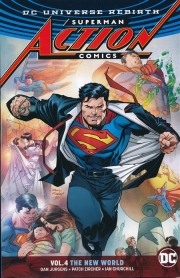 Synopsis : Collects
Action Comics (2016) #977-984
Following the shocking revelations of SUPERMAN REBORN, sinister forces are gathering in dark corners of the globe. Someone is uniting Superman’s deadliest enemies into a Revenge Squad.
Metallo, Mongul, Eradicator, Cyborg Superman...on their own they are deadly, and together they may be able to finally destroy the Man of Steel once and for all.
But the Revenge Squad has one more member in their sights, and he’s being held deep within Belle Reve Prison, home of the Suicide Squad. With General Zod on their side, revenge is finally in their grasp...and Superman’s rebirth might prove to be very short-lived...