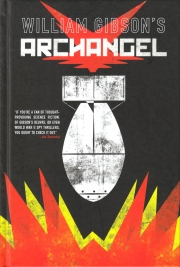 Synopsis : Collects
Archangel (2016) #1-5
To do it, they'll abuse the power of humanity's last hope: the Splitter, a colossal machine that will allow them to travel back into the past to entrench their hold on the future. With his characteristic grim sarcasm and militaristic pragmatism, Gibson leads us from the toxic environs of the present to war-torn 1945 Berlin, where RAF officer Naomi Givens will persevere against inconceivable, ruthless future forces, with the fates of epochs at stake.