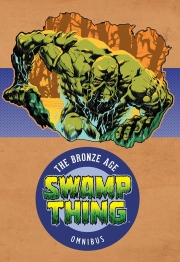 Now, all of the Swamp Thing’s early adventures are collected for the first time in SWAMP THING: THE BRONZE AGE OMNIBUS. This hardcover edition features work from comics legends Len Wein, Bernie Wrightson, Nestor Redondo, Martin Pasko, Tom Yeates, Stephen Bissette, John Totleben and more!
Deep in the bayous of Louisiana, far from civilization’s grasp, a shadowed creature seen only in fleeting glimpses roils the black waters…a twisted, vegetative mockery of a man…a SWAMP THING!
One of the most acclaimed creations to emerge from the Bronze Age of Comics, this shambling, muck-encrusted figure swiftly became one of DC’s iconic characters, and his shocking stories are universally hailed as some of the finest tales of gothic horror in the history of American comics.