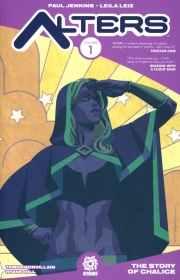 As the world struggles to accept the emergence of a new kind of human species known as alterations, or "Alters," a young woman must navigate the path to becoming her true self, while struggling with the complications of her civilian life and the responsibilities of her newfound power. This groundbreaking series - years in the making - begins the saga of a young woman who can only really be herself... whenever she is not herself. Collecting issues 1-5 of the critically-acclaimed series, plus the original short story from AfterShock Genesis one-shot. Written by Eisner winner Paul Jenkins and illustrated by Leila Leiz.