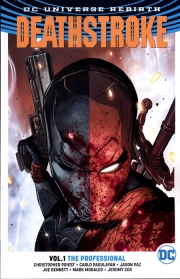 Synopsis : Collects
Deathstroke (2016) #1-5
Deathstroke: Rebirth (2016) #1
With a thousand enemies and a thousand kills, Slade Wilson, a.k.a. Deathstroke, is the world’s greatest assassin. His genetically enhanced strength, reflexes, healing and intellect—plus his ruthless dedication to his work—have made him one of the most feared people on the planet.
But even Deathstroke has vulnerabilities—and someone in his inner circle is beginning to exploit them.
When an assignment in a war-torn African country leads him to an old teammate, Deathstroke discovers that his own daughter, Rose—a.k.a. the Ravager—has a price on her head. In order to save her life, he’ll have to break his professional code, betray his most trusted allies, cross his most powerful enemy and defeat his own unshakeable addiction to violence.
Can Deathstroke run this gauntlet and survive with his family, his honor and his life intact?