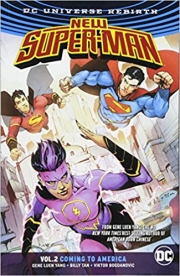 Synopsis : Collects
New Super-Man (2016) #7-12
He’s got the powers of a Kryptonian, the fame of a celebrity and the gratitude of the biggest country on Earth. But high-flying hero Kong Kenan, a.k.a. the new Super-Man of China, is about to have a crash course in what it takes to be a Man of Steel.

With his powers on the fritz and the truth of his mother’s murder still out there, Super-Man turns to the tutelage of the mysterious I-Ching to get back on track. His path will take him from fighting side by side with Bat-Man, Wonder-Woman and the other heroes of the Justice League of China…to battling his rogue predecessor with the fate of the nation at stake…to a meeting in Metropolis with none other than Lex Luthor and the original Superman himself!

Does Kenan have what it takes to go global? He’s about to find out!