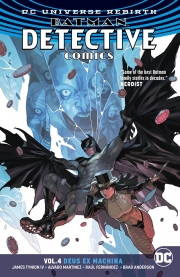 Synopsis : Collects
Detective Comics (2016) #957-962
Batman’s team of vigilantes has ghosts in their pasts. And now they have come to roost.
When Batman formed a team of fellow vigilantes to help him combat evil in Gotham City, he did it partially to protect his allies from the enemies targeting them. But being on a team makes for more targets, and sometimes the ghosts of your past can become everyone’s problem.
Azrael was raised to be the perfect assassin by the mysterious Order of St. Dumas...before he rebelled. But when the Order decides to create a more perfect assassin, Azrael and the entire team find themselves in the crosshairs of the deadly A.I. known as Ascalon.
This kind of magic and mysticism was part of Bruce Wayne’s training when he became Batman. And to save his friends, Bruce will seek the most powerful magical artifact that ever existed. The God Machine can give its bearer any knowledge, answer any question...but in the hands of the World’s Greatest Detective, could it be even more dangerous than Ascalon?