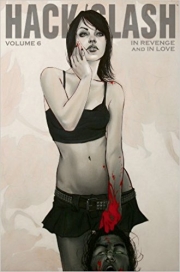 Synopsis : Collects
Hack/Slash: Entry Wound (2009) One-Shot
Hack/Slash: The Series (2007) #18-23
Hot off of the Hack family reunion, Cassie and Vlad are stopped in their tracks as Cassie is blamed and arrested for the murders committed by the very slashers she has sworn to eliminate. And, things get worse as they cross paths with everyone's favorite 8-year-old dream-reaper, Ashely! All this, as well as a much un-requested encore by the worst slasher this side of Nef, Six Sixx!