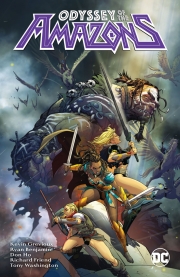 Long before Wonder Woman came to Man’s World, a fearless band of emissaries set out from Paradise Island to traverse the globe. Everywhere they traveled, they brought a message of peace—a noble goal for which they were prepared to fight fiercely.

Led by the intrepid Hessia, the Amazons’ mission is to find immortal warrior women like themselves from around the world, and bring them back to Themyscira to join their sisters in arms.

But now these envoys of Athena face a grave new threat. When their youngest comrades are kidnapped, Hessia and her crew must venture where no Amazon has ever dared to tread: the Northlands, ruled by strange gods, gruesome giants and fierce Valkyries.

But will the Amazons find victory and kindred spirits in the frozen Nordic realms? Or will their quest lead them only to glorious death and the halls of Valhalla?