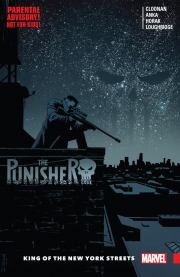 The Punisher is back in the Big Apple: Start spreading the bullets! He's coming today! He wants to destroy the crime of it...New York, New York! And when a blackout hits the big city, the dark brings out some of the worst that its mean streets have to offer. The NY subway can be full of horrible people on a good day, but for Frank Castle...this won't be a good day. Manspreaders, proselytizers and mariachi bands are all in a day's commute - but a gang of murderous criminals? And they aren't the only scary things lurking underground. Frank has them in his sights. Expect some slight delays