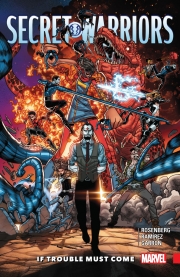 The Secret Empire has fallen - and now it's Deadpool's turn! During the Hydra takeover, the Merc with a Mouth killed Agent Phil Coulson, Quake's mentor and close friend. Now, Quake plans to kill Deadpool - but not if the other Secret Warriors have anything to say about it! And when a dark enemy threatens Inferno's family, he'll have nowhere else to turn but to his teammates. Can he convince the band to get back together - or will Quake's revenge stand in the way? Plus: Mister Sinister turns his experimental talents on the Inhumans! He's plagued the X-Men for years, and now he's turning his sadistic evolutionary experiments to a new race! It's up to the Secret Warriors to stop him. But what happens when their most fearsome warrior, Karnak, leaves to pursue his own agenda?