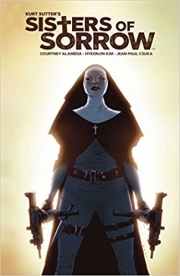 A group of women who have all survived violent attacks wear Nun habits and carry guns as they exact revenge on violent criminals who’ve escaped justice.By day, Dominique, Greta, Misha, and Sarah live in a nonprofit women's shelter. At night, they each don a nun's habit and move through Los Angeles hunting down violent abusers who have escaped justice. Their increasingly public vigilantism has earned them the nickname Sisters of Sorrow, and has drawn the ire of L.A.'s notorious anti-crime task force.