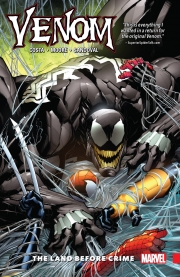 Reunited, and it feels so good! Or rather, feels so bad! Eddie Brock and the Venom symbiote are back together, web-slinging their way around New York again - and a host of creators from the character's near 30-year history are here to celebrate! With questions still lingering about how the symbiote was separated from Flash Thompson, what lies in its future now that it's reunited with Eddie Brock? Will he be the city's lethal protector once again, or revert back to a sadistic, Spider-hating villain? There's only one way to find out!