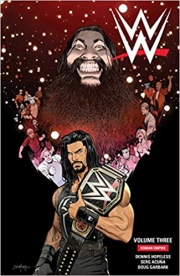 WWE: Roman Empire takes you behind the curtain for a closer look at one of Sports Entertainment’s biggest Superstars, Roman Reigns, as he tries to hold onto the WWE Championship while his former allies Seth Rollins and Dean Ambrose gun for his crown.Roman Reigns: the Big Dog. The juggernaut descendent of wrestling royalty has made it to the top of the mountain in WWE – just as everyone predicted he would. But it’s lonely at the top, and with the top two contenders for the WWE Championship being his former Shield brothers Dean Ambrose and Seth Rollins, keeping the title will be a lot harder than winning it.Writer Dennis Hopeless (Jean Grey, Spider-Woman) and artist Serg Acuña take readers on a ride full of broken alliances and big action.