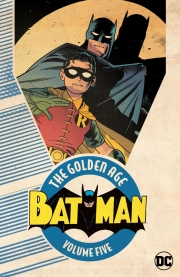 The Dynamic Duo of Batman and Robin becomes the Terrific Three when they are joined by Alfred Pennyworth.From his very first appearance in Batman #16, the ever-resourceful valet proves to be a worthy ally for Batman and Robin as they encounter a never-ending string of Golden Age criminals such as The Joker, the Penguin, Two-Face, the Robber Baron, the Cavalier and the Crime Surgeon.