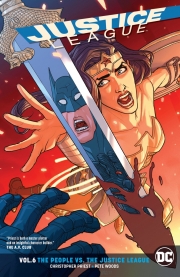 When Batman makes a careless error that results in loss of life, the heroes of the Justice League suddenly find themselves facing justice themselves. The team is brought before the law to be held accountable for their actions in a trial questioning the very existence of a Justice League.

And now, at the worst possible moment, a new threat strikes. Someone is using deadly means to defend the Justice League. Whoever it is seems to know everything there is to know about the team, from their deepest secrets to how to take down a Green Lantern.

Can the Justice Leaguers overcome this opposition when their confidence in their leader is shaken? Or will the League finally lose to the one enemy it can’t defeat—the will of the people it’s sworn to protect?