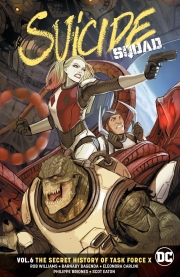 Today, Task Force X is better known as the Suicide Squad--but what happened to the Suicide Squad of the 1950s? Led by Rick Flag Sr., the original Task Force X defended the world from aliens, robots and even dinosaurs before vanishing into myth. Now it will fall to Harley Quinn to complete her predecessors' final mission and uncover where it all went wrong!

The Red Wave, the deadliest alien threat mankind has ever known, is no longer locked safely away on the moon. All that stands between it and Earth is the Suicide Squad. Before Deadshot can warn the clown princess of the danger she's in, his team is set upon by an army. Someone is desperate to protect the secret of Task Force X, even if it means destroying it and Amanda Waller!

Secrets, love, sacrifice and lies reveal themselves in the classified history of Argent and the Suicide Squad, twin branches of the original Task Force X. By the time the mission is complete, the Squad may never be the same again!