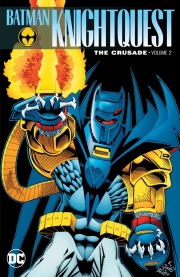 Following the events of Batman: Knightquest: The Crusade Vol. 1, Bruce Wayne is still M.I.A. because of debilitating injuries sustained during a recent clash with Bane. Now it's up to Jean-Paul Valley (a.k.a. Azrael) to carry the mantle of Batman in Gotham City. Unfortunately, Valley is wrestling with his own demons and is struggling to meet the high standards set by his predecessor.Now The Joker has resurfaced with a crazy new scheme to destroy the Dark Knight. But what happens when the Clown Prince of Crime realizes that something is amiss with his longtime archnemesis?