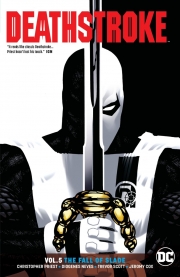 He is the world’s deadliest assassin, but lately the killer-for-hire called Deathstroke has become something more.

With the help of the “Dark Titans” of Team Defiance, he’s turned his life around, and turned his weapons on more deserving targets. But that means breaking the unwritten code that governs the criminal underworld…and making enemies on both sides of the law.

Now Deathstroke finds himself in the crosshairs of incredibly powerful foes, both good and evil. The Secret Society of Super-Villains—including the Riddler, Black Manta, the Reverse-Flash and more—wants him punished for turning his back on its wicked ways. His resurrected ally Dr. Ikon wants revenge. The New Super-Man of China wants justice. And his young allies on Team Defiance—including Kid Flash, Terra and his own children Jericho and Rose—just want him to stay alive and on the path of the righteous.

Each trial takes its toll. Each battle brings its casualties. Deathstroke is in the fight of his life. What, and whom, is he willing to sacrifice to survive?