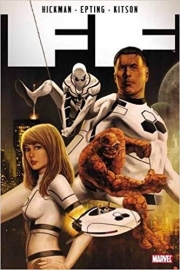 Before his death, the Human Torch made his wishes known: If anyone were to replace him in the Fantastic Four, it should be his best super-hero buddy, Spider-Man. but even with the addition of Spidey to their ranks,Mr. Fantastic, The Invisible Woman and the thing are now so much more than four. Welcome to the FF - the Future Foundation! Marvel's First Family has moved beyond the simple pursuits of super heroing into a bold new era of discovery. but to make tomorrow today, they'll need to expand their ranks even beyond Spider-Man and their genius children. What does the future mean when it depends on the likes of the Wizard, the Mad thinker, A.I.M. and Dr. Doom?