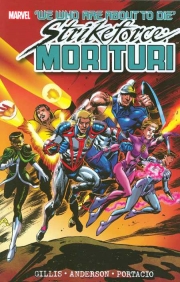 A savage alien race called the Horde has invaded Earth, enslaving its people and plundering its resources. Scientists have devised a method of fighting back - the Morituri Process - which grants enhanced abilities to a select few compatable humans. But the transformation is fatal within a year. Now, a handful of brave voulenteers make up Strikeforce: Morituri - an elite, experimental and highly effective fighting force against the depredations of the Horde. But the heat of every battle, the celebration of every victory, and every quiet moment alone is tainted by the inescapable knowledge that, win or lose, their fate is sealed.