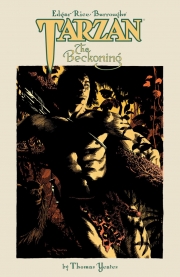 The ageless couple, Tarzan and his beautiful wife Jane, have been living in America, fighting the illegal ivory trade to stop the slaughter of elephants...but a they're soon drawn back to Africa, entangled in a dangerous web that threatens their long lives! Beginning in California and climaxing in a mythical jungle utopia, Thomas Yeates's Tarzan: The Beckoning is an action-packed supernatural saga, collected here in its entirety for the first time.