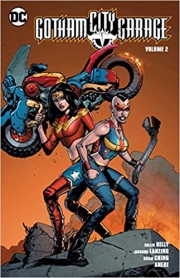 In a post-apocalyptic alternate future, there are only two possibilities: live in peace in the Garden, under the thumb of overlord Lex Luthor, or live free and fight tooth and nail for survival in the barren Freescape.

The only heroes who dare to challenge Luthor's supremacy are the bikers of the Gotham City Garage: Wonder Woman, Barbara and Kara Gordon, Natasha Irons, Harley Quinn and Big Barda. But now Luthor has decided he's going to bring the war right to the Garage...and wipe it off the face of the Earth.

Now the women of the Garage have five days to spread out across the Freescape and try to recruit soldiers to their cause, before Lex and his army land on them like a nuclear warhead. Can Harley convince Black Canary to return from her exile with the League of Shadows? Can Poison Ivy help Kara discover the truth about herself that Lex buried? Can Catwoman redeem herself after betraying the Garage to Luthor?

It all comes down to one final battle. Two armies ride in...only one will ride out!