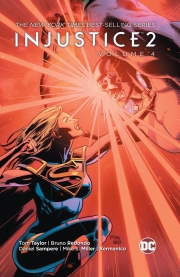 The follow-up story to the prequel tale of the smash-hit video game of 2017 is here with Injustice 2 Vol. 4! Batman and Superman are back at it each trying to save the world by rescuing it from the other one.
Steel (Natasha Irons) leads a task force in protecting the President-elect at the inauguration. Batman's team is on the verge of breaking free from Ra's al Ghul's jungle stronghold, but the Dark Knight himself gets tangled up with Poison Ivy.
However, when a larger battle breaks out, Blue Beetle thinks he's coming to save the day, but his inexperience leads instead to disaster...and death.