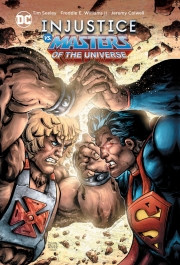 The realm of Eternia faces untold challenges when the champions of the best-selling fighting game series Injustice come to He-Man seeking help! And when Skeletor allies himself with the dark Superman and Wonder Woman on the other side of the battle, Injustice vs. Masters of the Universe becomes a war that spans two universes!

Prince Adam, a.k.a. He-Man, has regained his throne, but the secrets his people learned during his disappearance have left his authority severely weakened. When he takes the invitation to help Batman, Harley Quinn, Green Arrow, Starfire and other heroes of the world of Injustice, the evil Skeletor sees a chance to defeat his enemy once and for all by offering his own insights on how to defeat He-Man, Teela and the other Masters of the Universe! Plus: Swamp Thing and Mossman find common ground, Darkseid comes to Castle Grayskull and even more surprises courtesy of writer Tim Seeley (Nightwing) and artist Freddie E. Williams II (He-Man/Thundercats)!