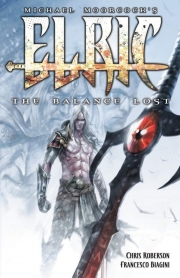 Signs appear throughout the Multiverse that the Cosmic Balance is in peril, and the Eternal Champion is caught in the crosshairs! Across worlds, Elric, Hawkmoon and Corum begin to face the force that threatens to overpower them all, while Eric Beck, a modern-day video game designer, must acknowledge that his reoccurring dreams of a Pale Prince aren’t all in his head... Join New York Times bestseller Chris Roberson (SUPERMAN, iZOMBIE, STAN LEE'S STARBORN) as he teams up with legendary fantasy author Michael Moorcock to bring Elric back to comic books in an original ongoing series! See why Neil Gaiman called Moorcock “my model for what a writer was” while Warren Ellis said he is one of the “eight core sites in my creative genome.