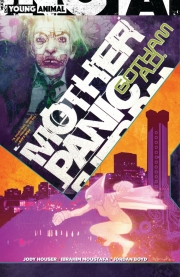 The cybernetically enhanced vigilante known as Mother Panic has been transported forward in time--but the near-future Gotham in which she finds herself has changed beyond all recognition!

In this new reality, Batman disappeared years ago. Madame Gala and her sinister Collective now rule the city, creating masked heroes and villains as living art projects. Under the Collective's high-tech tyranny, unsanctioned costumed crusaders face a lethal zero-tolerance policy, which poses a problem for Mother Panic as well as her kid sidekick Fennec Fox--not to mention all the Jokers and Robins who are warring for Gotham's soul.

To rescue her mother and defeat the brutal Collective, Violet Paige will have to navigate a city whose streets and power players are now a warped reflection of the ones she knows so well. But can Mother Panic master this fallen world's twisted topology quickly enough to redeem Gotham City's future?