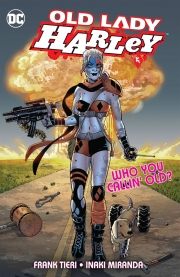 After liberating New York City from her now-feral Gang of Harleys, poor Harley wants nothing more than to slip back into retirement in her coastal (and heavily guarded) paradise. But the Laughing Boys Gang has another idea--they'll follow her to the ends of the Earth, to drag her back to their leader!

In a dark and twisted future--is there any other kind?--the onetime Mistress of Mayhem thinks she's wrapped up her final adventure. But when a rampaging gang called the Laughing Boys attack, she'll have to dust off the old baseball bat and take one last swing at a certain ex-boyfriend.

There's just one problem: Harley already killed The Joker herself... didn't she?

Old Lady Harley's quest to find the truth about Mistah J's return will take her from the Arkham Retirement Home to the 51st state of Atlantis and back. And from President Power Girl to the Bane Twins to Gotham City's tyrannical ruler, the Batman (?!?!), everyone wants in on the action. Can the Crone Princess defeat these dystopian forces and still make it in time for the early-bird special?