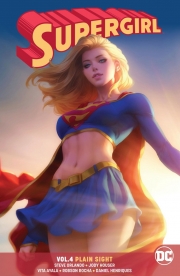 The star of the hit TV series on The CW faces threats new and familiar while trying to prove herself to the people of National City in Supergirl Vol. 4: Plain Sight, concluding the incredible run that launched from the DC: Rebirth event!

National City and the agents of the Department of Extra-Normal Operations believe Supergirl hid a murderer from law enforcement and want her brought to justice. The powerful Strange Visitor blames Supergirl for the maddening pain she's suffered since her return. Supergirl has come to grips with who she is and what she wants to be, but before she can make her decision a reality, the Evolutionist--a mysterious force dedicated to removing alien influence from Earth--makes her presence known. With forces against her on all sides, even in her identity as Kara Danvers, how will Supergirl rise to the challenge?