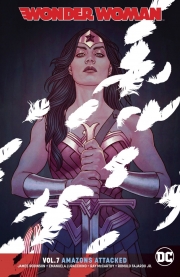 The Gods separated Themyscira from the world for a good reason: it serves as the prison for the God of War, and the most powerful army ever created stands guard around him! So what happens when the greatest evil in the universe decides he wants that army for himself?

The power of the ancient gods has returned Darkseid to his former self, but he wants more--he wants the throne of Apokolips back! But to put down the rebellions and civil war raging on his homeworld, he'll need an army more powerful than he's ever had before. That sounds suspiciously like the Amazons!

Meanwhile, Wonder Woman's brother Jason has always longed to meet his mother, Hippolyta, but the machinations of the gods have made it impossible. But now, with the barrier between worlds at its thinnest, could they come face-to-face at last? Should Wonder Woman help him return home, if it could lead to the destruction of the Amazons?