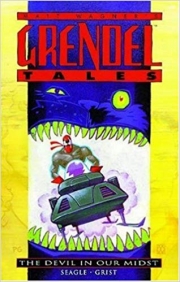 A lone Grendel warrior bent on suicide is found on the Antarctic coast by a team of scientists, and within hours, everything goes insane: the team gets cut off from the rest of the world, and one by one, they begin . . . bleeding. Now the Grendel who was so eager to kill himself must decide whether to help the others or end his own suffering. With only each other to rely on, and having no idea who will become infected and die next, the group becomes trapped in a deadly game of survival of the fittest!