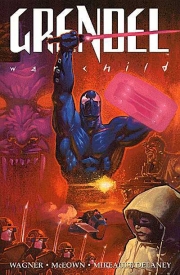 Grendel is one of comics' most provocative characters. From the beginning, Matt Wagner's stories have won critical and popular acclaim. This long-awaited continuation of the storyline picks up several years after the events of Grendel #40 and the death of Orion Assante. Ten-year-old Jupiter Niklos Assante, heir to the throne of the Grendel-Khan, is kidnapped from the retreat in which his rapacious stepmother has hidden him, away from his rightful power. The child is worth a hefty ransom, but there seems to be more than money on the mind of his kidnapper -- who is none other than Grendel!