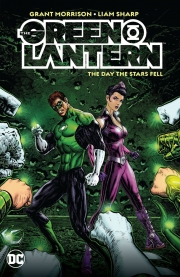 Wherever Hal Jordan goes--from the crumbling city inside his Power Ring, to a fantasy planet of wizards and dragons--an entire Multiverse of allies old and new await to help him in his quest. But even though Hal can always count on partners like Green Arrow and Carol Ferris to be in his corner...he'll have to face his greatest challenge alone.

The evil Blackstars have created the ultimate engine of destruction: the Anti-Matter Lantern. Now a journey into the anti-matter universe will take Hal to the very edge of reality--where the Green Lantern will have to make his final stand!